This section provides an overview of the Users and Roles model within Opsview Cloud, how to add new Users, configure Roles to limit access for certain Users and more.

Overview of the Security Model

This document explains the concept of Users, Roles, and Tenancies within Opsview Cloud, explain how to configure and add new Users, secure their access via Roles and create Tenancies for extra security and configuration options.

After reading the User Guide, Users should be able to create their own Users, Roles, and Tenancies and fine-tune the access control of Opsview Cloud for a range of different scenarios and requirements.

Opsview Cloud provides a security model that allows you to easily restrict Users and what they can access. This means that if you want to restrict a User so that they cannot create their own dashboards, or restrict it so they can only see Hosts tagged with a certain Hashtag, then you can.

Roles enable you to control various facets of the User's experience within Opsview Cloud, including what:

The general workflow is to create the Role, i.e. define what can or cannot be done, and then create the Users and assign them to that Role. Once everything is configured, you simply need to modify the Role to change the access control for every User within that Role.

Essentially, a Tenancy is a single Primary Role, which defines what objects (Hosts, etc.) the Tenancy can modify and see. This Primary Role becomes the basis for access control within the Tenancy. Unlike Roles, where it is a simply 'One Role can 'contain' many Users', a Primary Role (and thus a 'Tenancy') can be created to contain further sub Roles, as shown in the graphic below: 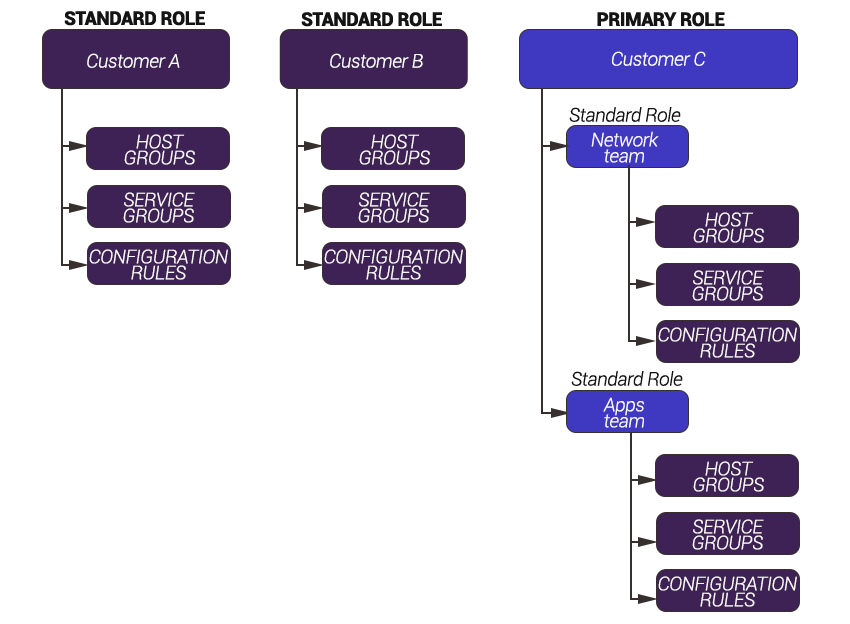 In the example above, there are two standard Roles; Customer A and Customer B. When a User is a member of the 'Customer A' Role, he can view all objects specified within the Role.

With 'Customer C' we have created a primary Role for the purpose of Multi-Tenancy. At this level, we have determined that all objects relating to 'Customer C' are available for Sysadmins to add to 'sub Roles'. There are then two Roles created by the Tenancy Sysadmin; 'Network team' and 'Apps Team'. These 'sub Roles' can take what is defined with the 'Customer C' primary Role and further limit it. For example, if Customer C can view 10 hosts, while 'Network team' Users can only view four of them.

Tenancies are a great way to give a control of Opsview Cloud to your users by allowing them to create new Hosts and further Roles and Users ' all within their own secure, private environment.

Updated about 2 years ago